Shia LaBeouf is a 31-year old American actor, best known for his role as Louis Stevens on the Disney show Even Stevens. In his long career in Hollywood, LaBeouf has acted in several hit movies like Fury, Disturbia, Transformers, Indiana Jones and Kingdom of the Crystal Skull, and Man Down. In 2016, Shia married actress Mia Goth who is British in origin. The couple is seven years apart in age. Goth has acted in movies such as The Survivalist, A Cure for Wellness, and Everest.

LaBeouf was shooting for The Peanut Butter Falcon on Friday night. It all started when outside the hotel lobby, Shia asked three black men for a cigarette. When they declined, LaBeouf’s anger just flared up. On Monday, new videos were released in which Shia hurls at the police that he is American and has rights.

Shia LaBeouf was arrested by Savannah-Chatham Metropolitan Police outside a hotel in Savannah, Georgia at 4 am in the morning. After the video of him abusing went viral, LaBeouf apologized and confessed that he is struggling with addiction. The 31-year old actor was charged with public drunkenness, disorderly conduct and obstruction after getting into an argument over a cigarette.

LaBeouf said that he is deeply ashamed of his behavior and will make no excuses for it. He said that he hit a new low and has been struggling with addiction for a very long time but never confessed it publicly. Shia is currently taking steps towards sobriety and hopes that the police officers he disrespected accept his apology and forgive him. 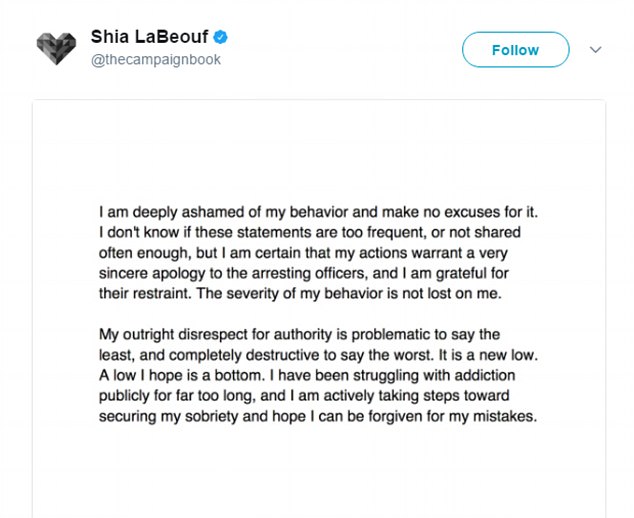 Even after he was taken to the police station, the Hollywood actor continued with his rant. LaBeouf went on to abuse the police officer’s wife which just didn’t feel right. His racist remarks just went on. Shia complained in the video that he was arrested because the police was racist and arrested him for being white. LaBeouf even threatened the police officer that we will call his millionaire lawyers and sue him.

LaBeouf has now been bailed and is seeking sobriety.